We have always been fans of Chick-Fil-A, and last night that appreciation grew even more!

About a week ago I saw on Facebook that the Chick-Fil-A in Columbia Mall was going to have a Daddy Daughter Dinner night.  I popped an email over to Anny and suggested that she go out with a friend of ours and I would take Abby to dinner.  She agreed and I signed up!  About an hour later, though, I got a phone call from their PR person asking me if I was open on the time or had one specifically in mind.  I told her that I could be open on the early side, but too late and Abby might be a Crabby.  She then told me that they "hoped" it would be successful, and were now down to one open spot and a wait list for everyone else.  The last slot they had was at 5:30 and I took it!  (Sorry other dads, I won't be around next time, you take those slots.)

I hung up and then realized that on Tuesday I had a staff retreat at work.  Argh.  On a normal work day I would be able to sneak out a little early to try and beat the traffic.  On a retreat day I would have no control over my time.  That is okay, just something I did not factor in when agreeing to a 5:30 dinner date!

As it turned out the retreat ended right on time, which was a little late for my preferred plan but not going to stop me.  I flipped on the traffic.  Backed up the whole way from where I was to home.  It would easily take me an hour to get home, then an hour to get to Columbia.  That would be 6:00.  Anny and I had talked about this on Monday, though, and agreed that we could meet somewhere and swap cars.  We met close to the middle, but clearly at a convenient place in Calverton, made the swap and headed our separate ways.

Abby and I got to the mall a few minutes early, or in Abby time "just right" for getting on the merry-go-round!  So we did that once and headed down to the potty.  We both did what we do in such a place and still ended up at Chick-Fil-A about ten minutes early.  They are close to the play area, and closer to a shoe store.  I mentioned that we were in the 5:30 seating and knew we were early, but I thought I would give them a heads up.  They noted that a lot of the 5:30's showed up a little early.  All of them, actually!  The tables were ready for us, though, so we sat immediately.

Our table - in the food court remember - was set our right for a date, even down to the doily!  Abby was given a long stemmed rose to celebrate, too! 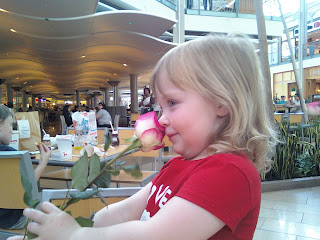 We had a table to ourselves, and even had a waitress!  That is a little funny at a fast food joint, but appreciated because I didn't have to wait in line!  We had our normal fare - Abby got nuggets, I got a grilled chicken sandwich.  Abby at the strawberries, oranges and grapes from the fruit cups and I got the apples.  Then we both share a chocolate shake.  Delightful!

I was sure to thank the PR person, whose name is escaping me.  It was a fun event and gave me an excuse to take my daughter our and spend time with just her.

We went and played in the play ground for a while, Abby even found an older girl to chase for a while.  It was funny, but made it hard to drag her away!  The only thing that worked was the promise of a trip to the pet store (we look, don't buy).  After that we went over to the merry-go-round for a final ride and then headed home.

It was fun and I look forward to more Daddy/Daughter dates in the future!  Maybe next time I'll upgrade the restaurant - a stand alone Chick-Fil-A instead of the food court!
Blogged by Rob Monroe posted at 7:03 AM

Email ThisBlogThis!Share to TwitterShare to FacebookShare to Pinterest
Other things like this (tags): Abby, Abby Pics, Adventure, Food, Fun

Where I Spend My Time